In tribute to Bob

Home » In tribute to Bob

An Open Letter to ACUC 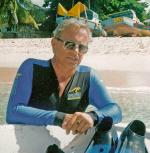 I
respectfully submit this letter to my fellow members of ACUC as a tribute to our president, Bob Cronkwright.  I know we are all saddened by his passing and offer our sincerest condolences to his wife Marg and his children Nancy and Mark and their families.  Those of us that knew him on a personal level could attest to his strong dedication to his family as well as to ACUC.

My name is Herb Holst and I am an instructor trainer evaluator for ACUC in Ontario, Canada, Bob’s home province.  I have known Bob a long time.  He was one of the instructors of the Hamilton Submariners scuba club in 1973 when I took my first scuba course.  I have since worked with Bob in a number of capacities including the ACUC Ontario Instructor Advisory Committee.  In this regard, it has been an honor and a privilege.  Bob and I also took our DAN Oxygen Instructor Trainer courses together in 1990 with Dan Orr when it was first offered in Canada.  My wife Sandi, also an ACUC instructor, and I were devastated that we missed Bob’s funeral as we were out of the country when this all happened.

Bob was the kind of singular individual that any corporation would love to have at its helm running the show.  He was friendly and personable to all that came in contact with him unless your intent was to challenge or undermine ACUC, or the standards and principles it stood for.  In that regard, he was fiercely defensive and stood his ground.  He was immensely proud of his agency.  At the same time, he also personified integrity in his dealings with people and the diving world in general.  Even those that disagreed with him could respect him.  One need only read the tributes that poured into the funeral home website to appreciate the impact that Bob had on the scuba diving world.

For those of us who were present, Bob, along with Dave Linton, his partner at the time, were acknowledged as the saviors of ACUC.  Back in the early 1980’s, ACUC experienced a tumultuous time including extreme financial hardship.  Despite advice from some that they lock the doors and walk away from the business, Bob and Dave persevered and turned it around.  And turn it around they did!  I cannot overstate that they not only took the reigns directly but also injected personal money into the agency to keep it afloat while they steered it back to prosperity.  Incidentally, all of this occurred before ACUC went private.

Bob was also a people person.  He enjoyed connecting with people in the diving world and people responded to that.  If anybody called the ACUC office and wanted to speak to Bob, they could.  A lot of times, if he was there, he would be the one to answer the phone in the first place.  No way would he hide behind a bureaucracy, out of reach of the masses.  He always encouraged people to come out and visit if they were in the area.  That was the way business was done and friendships were made in Bob’s world.

At the same time, Bob was an unassuming person.  In his own fashion, he would shun the spotlight and seemed almost embarrassed at what he would consider to be undue attention.  At the same time, he deserved that attention as much as anyone in ACUC or the rest of the diving world.  For his entire adult life, he also engaged in a personal battle with rheumatoid arthritis, a debilitating disease which caused him immense pain and discomfort.  Notwithstanding, Bob would never, ever complain about his condition or even talk about it unless you asked him about it first.  Most people would never have guessed at the pain he endured until later in life when it became impossible for him to hide it.

Bob was also faithful to those he worked with and those he considered his friends.  Many of his friends have been friends for a very long time.  He took his friendships and commitments seriously.  If you worked with him, as I had the privilege of doing on many occasions, he would support you and offer his backing, guidance or an opinion – whatever you needed.  In this respect, he was a true mentor.

As we move forward, I am positive that ACUC will continue to grow and prosper in the capable hands of Juan and Nancy. I thank all of you for this opportunity to express my thoughts and feelings in regards to, and in the memory of Bob.  I, for one, shall miss him.